Using RAW technique and Pellet centre, we also use round beads, Rulla beads and 4 Hole Lentils to make an exciting piece. I really like how the bracelet actually follows the shape of your wrist, but it incorporates so many kinds of beads and yet feels harmonious.

This bracelet is partly made with a version of the two needle RAW (Right Angle Weave) technique. For those who are not familiar with this technique, it basically means that you put a needle on both ends of your thread and cross them through the beads that are in the centre of your bracelet as described below in the tutorial. If not indicated all steps refer to both needles/sides.

3.  Pass through the last (B) and cross the threads through (G). Now go through the first (B) and (F). Here we need to change the hole, but keep our general direction, which we do by taking advantage of the four holes of the (F). After coming out of the first (F) go into the neighbouring hole (Red Dot on picture below) and then go into the hole opposite your first hole (Blue Dot on picture below).

Turn around and (as shown on picture below) connect back to the first (A). Re- peat the same at the other end then go through the (H)’s and (A)’s a couple of times. Add rings and clasps.

And you will have your beautiful finished piece, as below.

We catch up with Mandy Bryon from R F Bright Enterprises Ltd to find out all about this unique resin business. 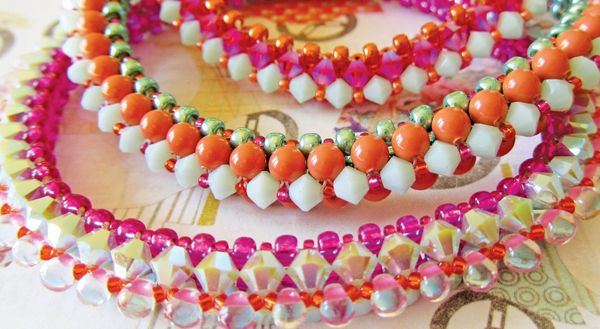