The image above shows Grandma Rolls Off teaching granddaughter
Cecelia Yellow Robe the art of beadwork around 1936.

You can tell a seed bead from a bugle, and you’re familiar with all the modern varieties and shapes of beads and know how to use them. But, did you ever wonder where it all began?

The short answer is that as with many other things, the beginning was happening in many places at the same time, so if you have a moment, grab a cuppa and join me as I hop back and forth and drop in on significant moments in the development of beads.

Throughout the ages and across all studied societies, there have been beads. These have served many important functions, apart from being aesthetically pleasing, they have been used as currency, in meditation and prayer and to denote social standing or power.

The creation and use of beads is reputedly the oldest art form known to mankind. Evidence still exists that back in Neanderthal times the earliest tool using people, were using these tools to make beads. They were making holes in bones and grooves in teeth so that they could be worn as jewellery. The oldest beads still in existence were discovered in Skhul Cave in Israel. These 1cm snail shells had been drilled to be threaded and worn as jewellery, and have been dated as having been created some 100,000 years ago. Ever resourceful, mankind has often utilised whatever came to hand so we can also find very early examples of beads made from drilled ostrich eggshells found in Kenya and carved eagle talons in Croatia and these have been dated as having been made some 40,000 years plus. But the diminutive Skhul sea snail shell beads hold the record so far. Aside from creating jewellery, the stone age people went on to add beads to their clothing. Not beads as we’d know them, but rather, large heavy pieces of shell ivory or bone.

Meanwhile, across different cultures and societies, methods of production and styles continued to be developed depending on what was available material wise and of course, influenced by the progress of available practices or technologies. The ability to control fire, for example, was a big developmental hand up for progress. Using fire, early Egyptians developed one of the first forms of glass making. They crushed quartz to a fine powder and mixed it with plant ash, and then they heated this at low temperatures in clay containers to form a ball of molten faiene. This substance was then cooled, crushed again and mixed with colour, which was usually blue or red.

After undergoing a second higher heating in another clay pot, it was once more cooled and the vessel was broken. This would then reveal a thick glass ingot which was worked on by artists to transform into a variety of many prized objects including beads. These glass beads would often find themselves in the company of kings and Pharos entombed in pyramids. A lot of effort though eh? No just ordering from the internet or a pleasant afternoon of shopping at a local bead fair or favourite shop.

So where was I? yes, progress and this time in the form of exploration, let’s go there. The world was opening up, and Marco Polo was visiting Venice and trading beautiful Asian beads made from precious and semi-precious stones. In 1292 all glassmakers in Venice had been moved to the Island of Murano, to lessen the threat of fire that glassmaking brought to the wooden structures housed on the Islands. Gathered together, sharing glassmaking secrets and honing their craft this community of artisans on Murano were much taken with these treasures and used all their skills to reproduce these jewels and stones from the glass.

This was achieved as early as the fourteenth century. These artisans went on to develop glass canes known as Rosetta. The structure of this creation was a central hollow cane with six additional layers of glass, in different colours. When ground down, this produced five concentric stars with 12 points. This innovative production method radically increased the number of beads that could be produced. This cane was later produced without the hole, as Millefiori.
Still held as the centre of excellence for glass today, this small island continues to produce exquisite examples of handmade glass beads including stunning examples of the 17th-century invention of lampwork glass. Some may wish it noted that around this time Holland was also producing vast amounts of glass beads used in trade, although the glassmakers of that time in Holland were Venetian, we don’t have time for that right now because meanwhile elsewhere.

Significantly in the 15th century, merchants have begun exploring America and Africa and beads were being developed into currency. The European ceramic and glass beads were being introduced to a variety of indigenous peoples and traded for furs and other commodities. Gradually this led to local handmade bone and shell beads being replaced totally by the European ceramic and glass ones. Glass eventually winning out as it proved cheaper and speedier to produce. Happily, the art of the beadworkproduced by Native Americans has never been lost. As popular as ever it can be found in richly decorated items of clothing, belts and headdresses as embroidery or the bead weaving patterns still indicative of a particular tribe.

In many societies, the rarer the bead, the more valued it became, indicating wealth and status. But it was not only social status that such ornaments communicated.

The placement or patterns created by such decoration could declare marital status,
age and personal achievements or even the origins of the wearer. In medieval England, the richly decorated garments were worked in beads made from precious and semi-precious stones and so expensive that they were worn only for high days and holidays and then only by the nobility or the clergy.

Where does the word bead come from? Well, I’m glad you asked. Apparently, from the English gebed or ebed meaning prayer or request, the dutch bede, the German Gebet. You pays your money and you takes your choice!

Throughout many world religions, Hinduism, Buddhism, Christianity, Islam,
Sikhism and the Bahá’í Faith beads have their role to play even today. The beads are used as a mnemonic for counting prayers. It is believed that during medieval times such prayer beads would have been the most commonly owned piece of jewellery across all social classes but that the materials fashioned to create the pieces would, of course, have varied widely from precious stones and metals to wood and bone.

Today, of course, we have amazing resources at our fingertips, all just a click
away. When considering our options we can shop the world! Make your choice from the fabulous glass beads from the Czech Republic, crystals, pearls gemstones and of course locally sourced handmade ceramic and glass beads handmade with love and care by local artisans, well worth scoping out. Why not consider making your own from polymer clay or paper? You could be part of the future of bead making.

There really is something for everyone regardless of budgets or skillset. So come on in, the water’s lovely. 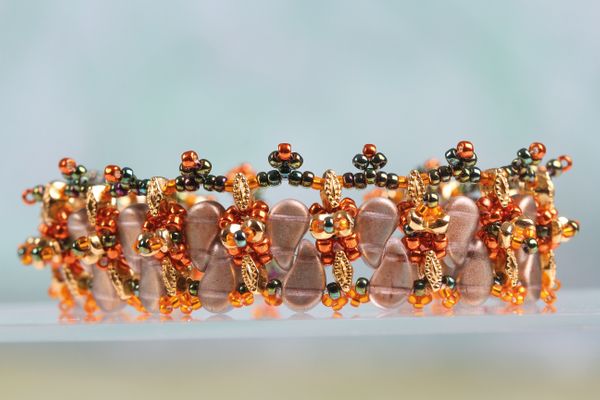 Bead and Jewellery recently teamed up with The Beadsmith for a reader challenge. 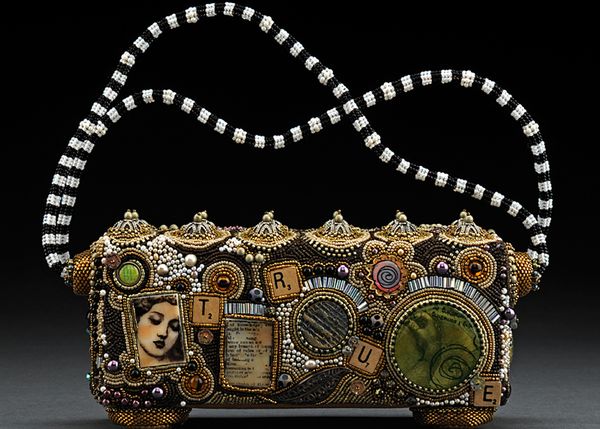